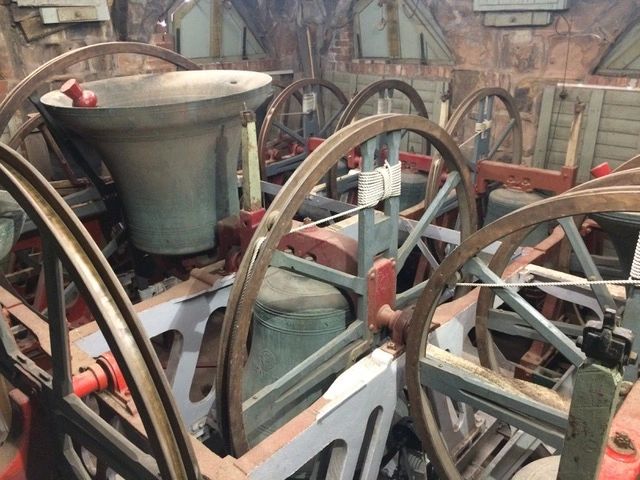 The Minster Church of All Saints Bellringing

The ringing of bells from the tower at All Saints can be traced back to July 1501.

By 1752 the tower had a peal of six bells hung so that English style change ringing could develop.

By 1812, this number had increased to eight but the Tenor bell was fractured and so by 1822, following an appeal, a new ring of 10 bells was hung in the tower.

This served well until 1924 when both the tower and the bells were in need of urgent repair. The current peal of bells were the gift of the Dyson family as a memorial to the then late Robert Dyson. Thanks to money raised by the local ringers and friends, this peal was augmented into a full 12 bell peal in 1986 with the addition of two treble bells.

Rotherham is fortunate to have an excellent peal, much respected by ringers from all over the UK.

Bells 3 to 12 were in the original peal. When John Taylor & Co installed the bells in a new steel and cast iron frame, provision was made to add bells 1 and 2 at some time in the future.

The actual bells are still the same as when they were cast. Over the years, bearings, clappers (the part that makes the noise) wheels and ropes have been either upgraded or repaired as needs be to keep the whole ring in tip-top condition. The bell frame has also been repainted on more than one occasion.

If you would like to read more about the history of our bells, you can download a PDF full of historical information below.

History, from the first bells to the current ring (pdf)Download